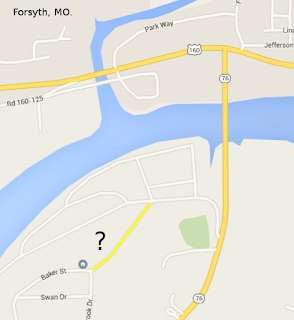 Forsyth MO. – That government owned gate that sits atop Baker Street hill and which leads down in the the federally owned River Run Park is once again open! But wait! It'll be open for just three weeks or until about the middle part of July when the Corps of Engineers have said they will once again lock it up due to 'construction' concerns. That's what I was told by a person that called them up on the phone... only he was lied to as they never did unlock that fk'ing gate. Perhaps the 'construction project' had been moved ahead, I wondered.

But, just what sort of construction would require the closing of a 300 foot segment of a county road that many residents of the Valley View Village community use to get to both the park and Highway 76 on their way to and from work? Was the entire park also to be closed?

That thought brought all sorts of questions to mind. You see, the trouble is that some agencies such as the Corps seems to have trouble corresponding to the common people on a regular basis, in my opinion. I did check their Recreation.gov site and discovered that they were still taking reservations all the way out into August! So, I was forced to assume that the park wouldn't be closed, just that short segment of street.

Wait! Maybe it had something to do with the Powersite Sewer Project. After all, they will be digging up the entire area for the installation of a new sewer. No, I called and they said that they too were trying to have access to the same road segment. Well, I thought, what about the bridge the runs over Bull Shoals? I had read somewhere that it was going to be replaced, with work starting just about this time. Nope, a call to MoDot put that idea to rest also.   So, the mystery deepens....