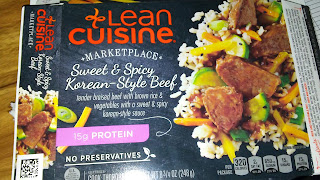 Other than going for the longest name ever on an entree, I wasn't sure about how I'd like this offering by Nestle USA Inc out of Ohio. First of all, were they talking North or South Korea. I didn't want nothing to do with anything Kim Jon-Un might have had his fat little hands on. So, I assumed it was a south Korean dish and therefore somewhat safe to consume..

At 320 calories, this offering was not bad, assuming it would fill me up. Also, the 650 figure for sodium was a livable amount. At least the food wasn't soaked in salt! 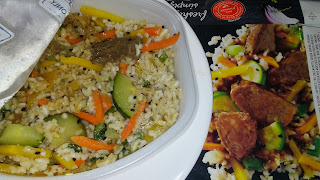 After performing the rather simple preparation deal in the microwave, I noticed that the meal didn't look much like the picture displayed on the box, but it was close! It also helped a lot that I was hungry as this food was a wee bit too sweet for my pallet. If this is what they eat in Korea, I could better understand why everyone is skinny. It wasn't something I'd ever order seconds of... that was for sure! Of the visible vegetables, I was certain of the carrots and only guessed that what looked like zucchini really was. The cook prime beef steak was OK and I never really made out the green onions or the host of ingredients like whey solids, molasses or succinic acid. Not sure that was really a bad thing. In the final analysis, this meal was sort of like what I thought K-rations must have tasted like in WWII. You ate the stuff and then didn't feel too bad about going off to die.

I rated this entree a 4 on a scale of 10 and honestly do not intend to purchase it again in the future... unless we have another war or something...
Posted by Dan Owen at 5:21 PM