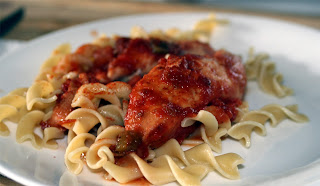 After tossing out the idea of doing a recipe known as Autumn Chicken in my slow cooker (missing some ingredients), I decided to throw in some chunky salsa and chicken tenders and then cook them on high for about four hours. At lunchtime, I them prepared a small amount of egg noodles in a manner that would insure I stayed within dietary limits! My chosen side was about 40 grams of canned green beans that had been soaked in water to brine out the extra salt. The result was interesting, tasty and allowed me the pleasure of eating pasta without the guilt. Now some notes on the two principal ingredients with an aside on sodium.

According to Organic Facts, 'eating chicken provides a good supply of protein, a generous supply of essential vitamins and minerals, results in losing weight (when eaten in moderation), aids in cholesterol control, blood pressure control, and a reduced risk of cancer.' That's a few reasons why I eat it on a regular basis.

The benefits of eating egg noodles are numerous, including; being a complete protein, which means that it contains all nine amino acids that the body needs. It also contains high levels of B vitamins, vitamin E, magnesium, iron, riboflavin, and calcium. Plus, it's gluten-free. Finally, chicken is naturally very low in sodium, although if you season it with salt, you’ll consume way more sodium than you may realize. Personally, I brine the meat to removes excess salt and then use a salt substitute, like potassium chloride, as a healthy alternative.

As you may have guessed, I try to limit my sodium intake as most processed foods, these days, seem to be soaked in the stuff! When you have a lot of sodium in your diet, your body automatically retains extra fluid (bad). Because of this, your heart works harder to push blood out to your extremities that are suddenly heavier. While you may experience no immediate effects, over time, your blood pressure goes up, raising your chances of suffering from heart disease.

Directions: Place the chicken and the salsa into a small slow cooker. I used a 2 quart model. Cook on high for 4 to 5 hours. At the end of that time, cook a cup of egg noodles according to package directions. Serves 2 and cost less than a buck per serving. The power used was also a deal; .4 kWh's or about 6 cents of electricity!
Posted by Dan Owen at 12:55 PM