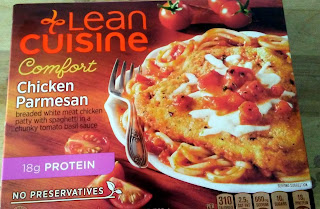 OK, so this meal deal is about chicken, cheese and pasta! So, what's not to like?

After all, at only 310 calories, who wouldn't want to pleasure their taste buds in such a fashion? I was all on board and really like any frozen entree that is a slash, nuke, stir and nuke again affair. Simple meal prep for a simple mind.

Well, let's get to it. (No one like long boring reviews). This meal was composed of four basic elements; 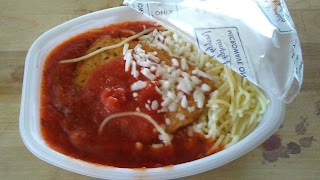 Chicken – The texture was 'chickeneny', and it tasted OK to boot! I gave it three points!
Pasta – Way overcooked for my taste. It was only saved by the.. (one point)!
Sauce – You basic tomato sauce made all the more palatable with lots of salt (660 mg)! Two points.
Cheese – The element was pretty sparse and hard to find once you began to eat! One point.