The 2020 election. My early predictions! 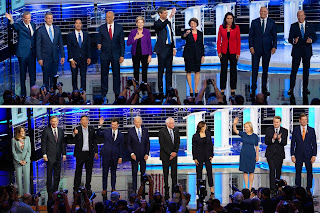 While the 2020 Presidential Election was still quite some time off into the future, I thought I'd make a prediction or two as to who the winner will be...

As June 2019 drew to a close, there were 24 candidates who had just finished the first of many such debates to be held on national TV. That process was designed to winnow down the field to one finalist that would be picked by the DNC as the party's candidate of choice to run against the incumbent Donald J. Trump. After watching the first two, I'd have to say that their combined efforts were just a tad short of mediocre. This was more of a meet and greet affair which showcased each candidates personal agenda rather than getting into the nuts and bolts of just how their plans could actually work. That said, there were a few standouts, in my opinion;

Warren, Harris and Castro did very well and picked up a ton of followers on Twitter. (They had definitely inched upwards and would likely do well in the coming debate battles). The rest of the field did not fare as well, with front runner Joe Biden losing quite a bit of ground even as he had a double digit lead over the rest of the field. The next two debates will occur on July 30 and 31 and promise to add perhaps a little more detail into how each candidates grandiose plans might be realized. By the time that the third debate swings around in September, it's hoped that some of the lower rung individuals (DeBlaseo comes to mind) will have dropped out. Then, as the field gets smaller and smaller via dropouts, there will be more time for each candidate to speak (or to hang themselves) during the two hour allotted amount of time. While some have argued that the size of the Democratic field somehow makes it harder to win the general election, there is no historic correlation between the number of contenders for a nomination and whether the eventual nominee won the general election. The far more important dynamic of such a large field is how difficult it is for any of those in the bottom half or even two-thirds of the field to have any chance of punching through.

Meanwhile the Republican contender, Donald Trump, will just sit back and watch the whole boring process grind on through the balance of the year as the Democrats will have six debates by December 2019. Then, at some point in time in 2020, the DNC will announce their pick at their convention and the real fun will start! Right now the safe bet would be Joe Biden, as he is by far the most moderate of that group of March Hares. That said, I would bet the farm that some of those running will make incredible sharp turns to the Right in order to stay afloat. That also will make for some great viewing....
Posted by Dan Owen at 10:18 AM