By whatever name they go by, the various forms of pasta are a popular mealtime treat here in America and elsewhere. Numbering at about 350 types, I personally like to prepare and eat just a few; Spaghetti, Penne Rigate and shell are three of my favorites!

When combined with a good red sauce, (like the ones that come in a can from Hunt's), I cannot think of many other meals that I enjoy more! The only downside being the carbs. The recommended serving of regular spaghetti on the package is 56 grams of noodles which is also about 56 noodles. A bundle measures about ½ inch across which is about the same diameter as a penny (see below), so it might not look like a lot. But whoa, if you look at the nutritional panel here, you can see that you'll be
consuming 41 fat causing carbs. [Note: While the dry amount does look kinda small(ish), those noodles actually do increase quite a bit in size after cooking!] However, I've found that by

eating just half a serving at meal time, that I could make a serious dent in the number of carbohydrates! Then continuing on that culinary theme, I often like to cook up a hamburger patty and then eat only half of that... Throw in a simple
oil & vinegar salad and you're all set!

I've found this to be a filling meal that comes in at only 320 calories, and when combined with the low carbs (30g), this 'pasta-styled' meal can be very diet friendly! 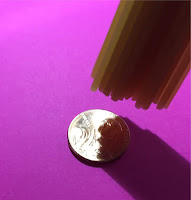 Notes: The picture at left shows a bundle of 56 grams worth of spaghetti noodles aka one serving. The better way to measure would be by using a scale and by getting used to the gram weight measurements rather than going by ounces. OK for those who don't like that idea, there are 29.3 grams in an ounce, so this would be about 2 ounces of pasta....

One added bonus to eating this way is you only have to cook stuff up one times for two meals. That's assuming your single, of course.