German ban on burkini lifted. Is America next? 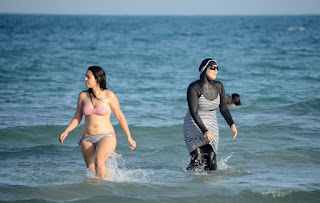 BERLIN – A German court has lifted a city's ban on the burkini, an all-encompassing swimsuit used by some Muslim women.

Wearing the garments in municipal pools in the western city of Koblenz was forbidden at the beginning of this year after the local council narrowly approved a ban. Officials argued that the suite makes it impossible to check whether wearers have open wounds or diseases.

The rules were challenged by a Syrian asylum-seeker, a pious Muslim who said doctors had recommended that she use a swimming pool to tackle pain caused by a back problem.

Rhineland-Palatinate state's top administrative court said Friday it has issued an injunction lifting the burkini ban pending fuller consideration of the case. It found the rules violated the German constitution's call for people to be treated equally. [Source: Fox News]

Me: Just in time for the start of summer! I'm so glad that this city in Germany has finally seen the Islamic light! Proper attire will likely be a topic for us as here in America, as it's no secret that the Muslim population is exploding! And, proper Islamic swim attire, such as this will come into the domestic Media spotlight in the near future. (Seriously, I'm concerned that MSNBC has not yet covered this developing story). I'm totally serial!

Unlike the American bikini (which lets it all hang out), the burkini covers up 98% of the female body from prying male eyes. And that's a no-no, as under Sharia law, as a man's property is a man's property.

A related topic that needs some consideration is just how the Islamic LGBT community here in the US will react? Should there be a 'Manburkini' developed for the devout transvestites female partner? What about either sex that may identify as the other sex on a moments notice? Perhaps a kind of window blind version could be sold that would allow the user a peak-no peak option. It's all very confusing to me, and as a result, I'm planning on staying away from all beaches this summer...
Posted by Dan Owen at 7:33 AM