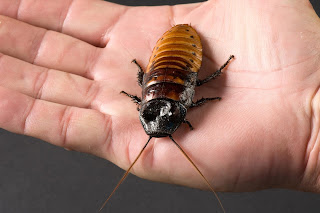 Rumors have circulated that cockroaches could survive a nuclear bomb. (That could be sort of true, but then again, mankind would have larger issues to be concerned with in the vent of a nuclear war). What is concerning to the average homeowner, however, is what may have newly acquired resistance to commonly used insecticides!

While it's not yet scientifically proven, scientists at Purdue University discovered German cockroaches are becoming resistant to insecticides. Even more horrifying: They can become cross-resistant to chemicals to which they haven’t even been exposed.

They can then pass those resistant genes onto their offspring, creating whole new generations of evolved super-roaches. Researchers worry this will some day make it difficult - or impossible - to control the bugs with chemicals alone.

Proper sanitation in combination with physical traps and sticky tapes are still good viable options. And don't forget, they don't fare well when stepped on by a human shoe....[ripped from CNN article]
Posted by Dan Owen at 11:45 AM