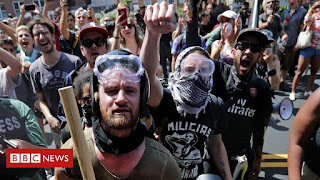 Just recently I posted the words 'shoot them'! This was in response to another post depicting elements of antifa and BLM gangs who were out trashing yet another city will beating in the heads of store owners who were trying to protect their businesses. I sincerely meant what I said. The police have an obligation to protect people under assault with and including lethal force! This opinion, apparently, is not followed by the censorship bureau at Face Book. One can almost get the idea that this social site approves of violence as a means to an end. One could even accept the concept that Mark Zuckerberg is all in when it comes to bigotry, racial divisonism and socialistic group think. Seriously Mark?

So, I was suspended for a month over that comment. But, was I mad? Not really. Especially when I consider just how far off the rails the Left-leaning social sites like Facebook, Google and Twitter have become. They seem to have developed the concept that you can say anything, only so long as it fits their concept of correctness. Well, I'm sorry. I'm not always 'correct', what I am is truthful.

In the coming weeks, I fully expect the noose around the collective necks of American citizens to become ever more tight as the Democrats make one last push to collapse our Republic. Whether we submit meekly or fight tyranny will be the true question of this Nations morality and heart.