So, who won? Or actually, who cares? 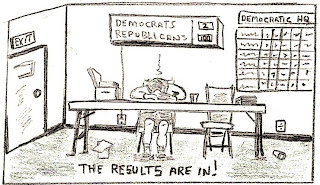 Now that that the 2010 midterm elections will soon be history, the question becomes…what next? After millions of dollars have been spent by candidates on both sides… after they’ve invested a yearof campaigning and speech making… so what? I’ll make you a bet here and now that not a thing will have changed. I’ll also bet that during all those campaigns that ran for House, Senate and other seats promises were made and strings were attached. Thirty days from now you won’t even be able to tell there was an election as both sides will be right back a each others throats in the halls of congress while the Republic sinks ever further in a mire of debt and failed promises. Actually, that’s not a bet, it’s a fact.
Posted by Dan Owen at 8:07 AM