The SPC theory of a trigger for the next ice age! 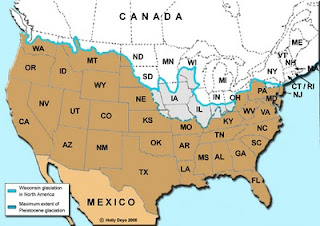 While standing outside fueling my car recently, someone at the next pump asked me if I thought we might have a hard winter. ‘Duh’, I thought. It was about twenty degrees that day in early December and winter hadn’t even officially arrived. But, his remark did cause me to think about the recent snowstorms that have occurred in the northern tier of states, especially in Wisconsin where the mercury has already dipped to zero a few times and Milwaukee just went through a blizzard. So, I responded with, ‘No, I don’t think so and neither does Al Gore’.

As I paid for my gas, I reflected on a personal theory of mine which I like to refer to as the SPC trigger, and whether there was any validity to a theory that it is not one but a combination of factors that can bring about sudden changes in the earth’s climate. The term SPC refers to solar output, precessional rotation of the earth, and Carbon Dioxide levels in the atmosphere. Three major influences that can be game changers in the climate of earth.

Scientists have tracked the output of the sun for a long time and now know that it changes over time. This change is linked to sunspots which follow an eleven year cycle and which may be involved in longer cycles that are poorly understood. What is known is that the last ‘Little Ice Age’ occurred during a time of prolonged absence of sunspots in or around 1750. Refer to the Maunder Minimum for more information on this.

Axial precession is the movement of the rotational axis of an astronomical body, whereby the axis slowly traces out a cone. In the case of the Earth, this type of precession is also known as the precession of the equinoxes or precession of the equator. The Earth goes through one such complete precessional cycle in a period of approximately 23,000 years, during which the positions of stars as measured in the equatorial coordinate system will slowly change; the change is actually due to the change of the coordinates.

The change in the tilt of the sun over this period of time affects the total amount of energy that reaches and thus warms the earth. Due to this wobble, a climatically significant alteration can take place. When the axis is tilted towards Vega the positions of the Northern Hemisphere winter and summer solstices will coincide with the aphelion and perihelion, respectively. This means that the Northern Hemisphere will experience winter when the Earth is furthest from the Sun and summer when the Earth is closest to the Sun. This coincidence will result in greater seasonal contrasts.  At present, the Earth is at perihelion very close to the winter solstice. 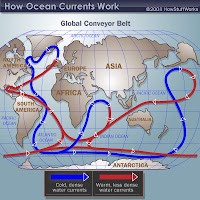 CO2 has been shown to be directly tied to past ice ages in the sense that just before each one the earth recorded record high levels (see map). One theory reads as follows: ‘Many scientists fear that global warming could affect the deep ocean global conveyor belt. If global warming leads to increased rain, as some believe it might, the added fresh water could decrease the salinity levels at the poles. Melting ice, another possibility of global warming, would also decrease salinity levels. Regardless of the means, the end scenario is the same: Warmer, less dense water won't be dense enough to sink, and the global conveyor belt could stop -- having far-reaching and devastating consequences [source: NOAA: "Currents"].

Recently, the amount of CO2 in the air was measured at 387 parts per million (408.47 ppm as of Dec 2018), which is significantly higher (click on graph above) than previous levels were just prior to a major shift in global temperatures downwards.
Posted by Dan Owen at 9:46 AM