Why efforts to curtail global climate change are doomed from the start. 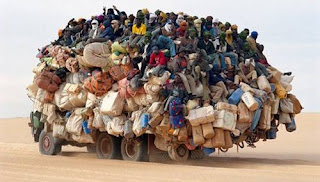 A recent article published on the CNN web page was written by a gentleman named Kumi Naidoo. Kumi is the executive director for the Greenpeace International and I found the article well written.

One point he makes is to state that “most scientists tell us that we must dramatically curb greenhouse gas emissions if we are to avert catastrophic climate change.” Truer words have never been spoken, however there exists a fly in the ointment of that statement. It has to do with people. Too darn many people.
Even if all the world’s leaders were to suddenly be smitten with the desire to completely curb the careless throwing of carbon into the air. Even if we were to plunge ourselves back into the Dark Ages by outlawing the use of gasoline, diesel and coal, there would still be a minor problem.
In case no one has noticed the world population is exploding. Just since 1960, a time many of us remember, it has grown from about 3 billion to something over 6.7 billion. Multiply that number by 900 grams. That’s roughly the amount of CO2 gas that each and every one of us emit per day, every day, 24/7. Then there’s the methane gas, but I think you get the picture.
Unless we do something to drastically reduce the total population, no amount of other corrective actions we take will amount to very much in the grand scheme of things.
Yes, Mr. Naidoo, this tired old planet needed amends made, but that time was decades ago. At current growth trends, we will have 8 billion or more souls on this planet by 2025 and it will keep going up more or less logarithmically from there. Worldwide CO2 levels, currently at an all time high of over 888 parts per million (the highest levels in over four hundred thousand years), will continue ever upwards until such time as the planet will elect to bring about a new balance. More than likely this will take the form of an ice age when melting ice caps breakdown and stop the thermohaline circulation belts in the oceans. Of course we just may all die of heat prostration in a runaway greenhouse scenario. Take your pick. Either way, the time for definitive action was long ago.
Posted by Dan Owen at 12:15 PM