The Burka now banned in France! 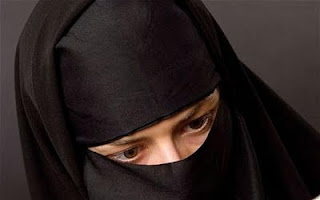 Well, they’ve gone ahead and done it! The wearing of a full face veil in public is now subject to a 150 euro fine if she is discovered with her face covered on the streets of France. Not only that, any man who forces a women to wear such garb is subject to a 30,000 euro dollar fine with a possible jail sentence! Now, movements to ban the garments have gained ground across Europe. Polls in Italy, Spain, Germany and Britain have indicated widespread support.
What the hell is going on here? Everyone knows this ban is directed solely at Muslims and especially at Muslim men whose religion teaches them that women are mere property and nothing more. I say if a man wants to ‘cover up’ his property, then he should be afforded that right!
Thank God, we here in America are much more tolerant of other peoples religions. I also personally find Muslim women to be offensive in appearance and fully understand and support the desire of their men to keep them covered much the way Americans keep lids on their garbage cans. I call on Progressives everywhere to take a stand and insist that more laws be created to force people living here to fully tolerate that which some find intolerable. God bless Obama, Reid and Pelosi and the fine vision they have of a new and changed American Socialist State. Maybe Harry and Nancy could even get together and co-sponsor a new bill that would create a new 'Department of Tolerance'. A new governmental layer who purpose would be to enact new and sweeping regulations that would cover the proper conduct of all Americans with regards to how they may or may not respond to other Americans. Anyone failing to respond properly, as the state shall see fit, will be shot!
Posted by Dan Owen at 8:12 AM