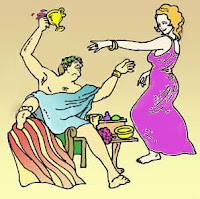 Let me begin this critique with a brief discussion of the word ‘Romano’ which is used in the naming of this dish. Romano is actually a reference to the Romans who made it a habit to introduce the ‘backward Brits’ to the concept of fresh vegetables as part of a healthy lifestyle. One way for the new ‘Romano-British’ elite to demonstrate their high status of that period was to invite their aristocratic neighbors to dine lavishly on food imported from around the Roman Empire. On the other side of the coin, no one seems to know where the hell the term ‘Fresca’ came from. (I think the HC people used it because it sounds so cool when used right after the word Romano). (Hey! Maybe I should change my name! “Hi, DanO Romano Fresca here! Would anyone care for a game of squash?” Then again, maybe not)!
--------
I originally purchased this entrée alongside another similar dish called ‘Lemon Herb Chicken’ both of which are made by the folks at Healthy Choice. They are part of a group of entrees that are ‘steamed in situ’, which basically means you leave the plastic cover in place while nuking the contents on high for about four minutes. (Somehow this makes it a healthier experience according to HC, although I’m not really sure why that would be so).

At only 230 calories and with low levels of cholesterol and sodium, this meal passes muster when it comes to good nutrition. (I’ll give credit where credit is due). HC does make an effort to keep some ingredients that can be bad for you (like sodium) at lower levels than what is found in other similar frozen offerings. In general they will cost a bit more, but if you suffer from hypertension, I feel they are worth it! Now, what about the scoring?

This offering by the folks at HC hit a home run in my opinion. Low calorie impact and great taste combine to make this a meal to try and then to stock up on!

Disclaimer: All content in this post is the sole opinion of the author and may not reflect that of other readers.
Posted by Dan Owen at 3:49 PM