Forsythkid’s Top Five List of cities we could sell to China! 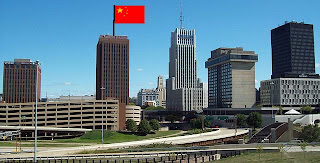 Alrighty! It seems the Fed owes China quite a huge sum of money. I think we all know that. And, it seems that our little friends have also figured out Mr. Bernecke and his plan to print our country out of debt. So, what say we offer these little people some honest to goodness real estate that they could come over and take charge of?  Here’s my top five list of candidate cities to sell off:

This city in Ohio made the top five list for the simplest of reasons. I’ve never actually met anyone from there! So, really, who would miss it if it went under Chinese control? Value: $20 billion.

Old Chi town is going down! At least that’s the word on the street these days. Selling this city to the Chinese would give these people a pretty decent football team not to mention one hell of an L-train. Value: 45 billion

The Motor City’s best days are now in the rearview mirror as far as I’m concerned. Would give the Chinese a chance to experience some really heavy lake effect snowfalls! Value: 15 billion

Now here’s a real no brainer! LA already boasts a large Chinese population with only a boatload of Latino’s coming into that city while everyone else quietly leaves. In addition, let's not forget that this piece of real estate could drop off into the ocean at any moment! Value: 50 billion

This Democratic bastion of loons, misfits and genetic hairballs should be offered to China for free! Hopefully, they would be also dumb enough to take over this royal mess. It would give them a nice sea port over here and who knows! Perhaps it can all work out! Value: $1

After adding everything up on the old calculator, I come up with a figure of just over 1.3 trillion or about what we owe those yellow midgets. Voila! Suddenly America is not only out of debt, but we've also has taken care of the Democratic Party problem. Sounds like a win win situation to me!
Posted by Dan Owen at 11:27 AM

Email ThisBlogThis!Share to TwitterShare to FacebookShare to Pinterest
Labels: Danomanno, Forsythkid, Top five list of cities to sell to China