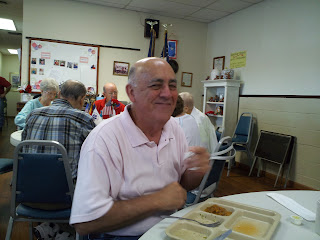 It was with some shock that I can report that a certain individual, who recently attended a lunch held at the Senior Friendship Center, had little or no training in the ‘niceties’ of civil behavior. Not wanting to identify this individual by name, I’ve chosen to call him Dennis Conroy, a fictitious name I pulled out of a hat.

By way of explanation, the Forsyth Senior Friendship Center offers food at great prices for those over the age of 60. Everyone, however, is invited to attend. The younger people, like Dennis, are asked to donate $6 to help keep the Center afloat. Yet, there are always some people who shirk their responsibilities and try to ‘game’ the system. Dennis, I would submit, was one such individual.

My suspicions of nefarious conduct began when I observed this man (who I’ll continue to call Dennis) at the entrance of the establishment. I saw no money being deposited in the donation box as he boldly shoved his way through a clutch of aging women. He apparently was headed towards the serving window, which was still closed at that time. A casual glance that way concerned me as I observed him engaged in a heated conversation with an elderly woman on the other side of the window. I rose from my chair and went over to him just in time to hear him declare, “Well I’ll just stay here until you’re open”!

I informed Dennis at that time of the protocol of assigned tables being allowed to go first and that he would just have to wait his turn. I then grasped his arm gently by the elbow and lead him back to my table where he sat down and then assumed a sullen posture.

No much later, someone rose from his seat and asked for to everyone recite the Pledge of Allegiance which we all did in hearty fashion. Then, there was a moment of silent prayer during which I noticed Dennis clandestinely skitter over to the serving window while the rest had their heads bowed. I remember frowning, but I held my peace and properly waited my table’s turn to go and get my own food. By the time I got seated again and happily for everyone at that table, Dennis had gobbled up his food and was gone when we returned.

The moral of this tale – Don’t be a 'Dennis the Menace'!

Aside: This was a tongue-in-cheek wandering of my imagination. Dennis is one of the best people you could know; he’s a published author and a good friend...hopefully!