The KFC in Forsyth Missouri! 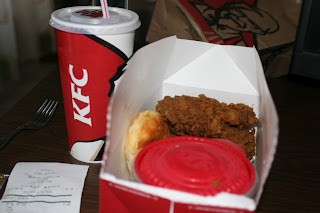 It wasn’t very long after the KCF/Taco Bell located in Forsyth Missouri decided to scuttle the Taco Bell that I made the decision to actually eat there again. You see, on all my previous trips there, it was the tacos I was after. Now as there are ‘nada tacos’, I thought to give myself a chance to rate the poultry side of this business.

One of the reasons I’ve avoided ordering KFC meals is that I’ve found the menu confusing. After having arrived at the venue and walking up to the order desk, you have something light twenty seconds in which to order. Otherwise, the cashier and those standing behind you start getting antsy. So, with sweat beginning to form on my brow, I would generally order the three piece extra crispy chicken with coleslaw and ‘mashed pertater’ sides. I mean all the KFC’s have this, right? But, what was I missing out on?

This time I decided to take the bull by the horns and made an excursion there just to take a quick snapshot of the order board. That way I could pore over it at my leisure so that the next time I actually did order, I would look like the seasoned veteran I want everyone to think I am. OK, this did not actually go down that way! When I got there, I did snap a picture, but then tried to sneak off to a corner where I could view the offering without actually standing in line. This would have worked out great had I not been the only customer there. As it was, I stuck out like some kind of weirdo….. And, when I did finally approach the counter my brow was covered with sweat anyway……..

So what did I end up ordering? Why the extra crispy three piece chicken with coleslaw and mashed potatoes! Duh! (You see, I also have this thing about not trying anything new).

The ‘meal’ that was delivered to me came in the cute little box you see above. And, golly it cost only $6.99 before taxes! The 2 pieces of chicken consisted of one piece that was discernible as a chicken leg and one that was not discernible as any part of a chicken I ever remember eating! There was also a small tub of mashed potatoes which tasted OK and a tub of coleslaw which actually did not. Nestled in between these was a biscuit that also cam with two little packets of ‘butter’ and honey. I used only the honey and found the biscuit to be the best tasting deal of the whole lot. It wasn’t that the chicken was bad, mind you, it was that it was incredibly greasy; a fact that made opening the two little side order container a major chore. (I can remember in days long past that you’d get a couple of pre-moistened toilettes to clean your hands with – well those days are gone…no nothing extra in the box – you needed to remember to get your utensils and napkins from the condiment tray or you were out of luck)!

Truth be told, for less money, I can go across the street to Sonics and get myself a Chicago Dog, fries and a coke. And while many people love this kind of food,I think I'll take a pass.
Posted by Dan Owen at 4:01 PM