Anyone who has purchased meat at a grocery store, recently, has more than likely encountered a little touch of sticker shock! Long gone are those so-called cheap cuts of meat. I can remember eating lots of roast beef as a youth because my folks had to scrimp and save money in order to buy groceries at the local Jewel Osco located in Mt. Prospect Illinois. Back then (in 1978) you could purchase a five pound roast for about $3.95 – enough for a great dinner with enough left over for a good number of sandwiches later in the week. (Of course, back then, potatoes were 9 cents a pound and a carton of eggs could be had for sixty cents)! 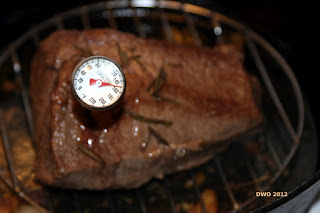 Today, even a small pound and a half roast costs over $7 – just enough meat for one dinner and a few sandwiches. So, it’s important to know how to cook these little guys properly. The roast beef pictured here weighed in at 1.45 pounds and cost $7.53. To prepare it, I employed an old Dutch skillet I had inherited from my parents. I heated it up after adding a few chopped onions, garlic and virgin oil. I then browned all the sides of the meat which has been allowed to reach room temperature first. Just before baking, I placed a small rack in the bottom of the skillet to elevate the meat. Everything was then covered and placed in a pre-heated oven set to 325F. for about 40 minutes. A meat thermometer was used to insure that the internal temperature was between 145F (medium rare) and 155F (medium).  Once the meat was done (see this site for more complete directions), I allowed it about ten minutes to rest on a cooling rack – this to insure that the juices did not run out all over the counter when I sliced it.

This meal, which took under an hour to fix, turned out extremely well. The meat was just lightly pink in the middle (medium) which was re-enforced by a thermometer reading of 150F. Add a couple of veggies and some horseradish and you have the makings for a great repast.
Posted by Dan Owen at 12:11 PM