Another use for a canning pot – making distilled water! 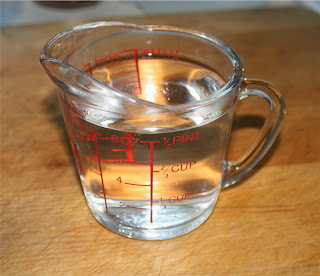 After I discovered that one byproduct of chlorinated water is a substance known as chloroform a highly cancerous substance1 that is implicated in increased rate of colorectal and bladder cancers2, I began buying distilled water at the local grocery store for about a buck a gallon. That worked for a bit, but then I found myself awash in a sea of plastic jugs that I was forced to throw out in the trash. That wasn't good for the environment and was wasteful to boot.

So, what I did was to do a little more research on ways to generate distilled water that would be both safe and economical. One method, I was surprised to learn was to set out clean containers to collect rainwater. Note: This only works especially well when it really pours which is not often!

Another method is pictured here. I took a canning pot that was collecting dust, cleaned it out and

filled it about a quarter full with tap water. I then placed a clean glass casserole dish on top of the canning jar rack that came with the pot. All I had to do then was turn the heat on the stove to low, place the lid on top in an inverted fashion, as shown, and then dump some ice onto the lid! Twenty minutes later I had about a cup of pure water at a cost in electricity of about 4 cents. To make a quart of distilled water, then, should take about an hour at an estimated cost of 16 cents (just a guesstimate) in power. This was something to try, but I didn't see me going with that process for very long.

Next, I turned to the Culligan water people where I learned that they did, in fact, offer distilled water at a rate of $7.50 (valid at the time of this post) per 5 gallon jug of water. They also were offering a cooler tower for a lease rate of $10 per month. Not bad, I thought, so I sat down to try and figure out just how much water I typically would consume in an average day. Turns out it was just about 4 cups a day or 7 gallons a month! That would translate into a cost of about $9.10 for water or $19.10 for the jug of water and a tower per month. My cost, by comparison, for getting my water from the grocery would equal only about $7 to $8! So, it looks like I will be going with that option and damn the environment.