Making do with cheap cuts of meat! 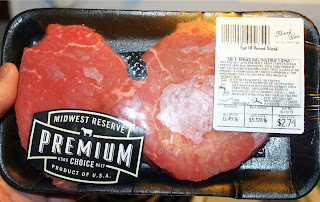 Sometimes I just have to laugh out loud when I see our President speaking on the TV, telling everyone how much better off we all are in this, his 5th year in office. Well, maybe the poor are better off (and I'm pretty positive the rich are not hurting too badly), it's just us common working folks who are caught in the middle and who are making the tough choices!

Recently, I went to my local grocery store with the idea of buying myself a good steak, but the sticker shock caused me to immediately downgrade to something a little cheaper... (Those small strip steaks I used to by for about three bucks were now way up there! And, those really good tasting New York strips and Fillet Mignon's? Nope! No way Jose)!

So, pictured above is what I was able to buy for just about $2.70. As you can see, not very appetizing. Reminded me of something out of Portnoy's Complaint. But, let's see what I can do with it.

Hmm, stir fry came immediately to my mind. I began by slicing one of the 'steaks' into thin strips. These were then placed into a plastic baggie along with a 'secret marinade1' overnight in the

fridge. Theoretically, a good marinade will act to break down any tough fibers thereby making that cheap cut of meat easier to chew.

This next morning, I cut up bell pepper and and half a small onion and stir-fried everything in a hot skillet that contained olive oil, rosemary, basil and oregano. How'd this deal smell while it was cooking? You'd have to be there. But, suffice it to say, it was heavenly.

For the recipe base, I elected to make up some instant rice – always a good idea with any stir fry recipe. As you can see, this dish not only looks appetizing, but it also tasted out of this world! 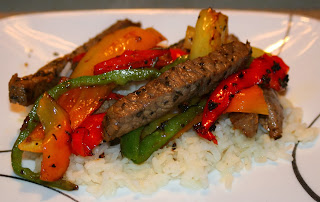 1 – My secret marinade consisted of mustard, white wine, tobacco sauce, A1 and minced garlic.
Posted by Dan Owen at 8:05 AM