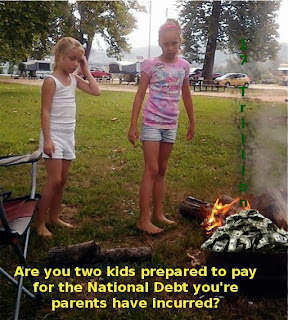 I took a picture from Facebook of two kids standing around a campfire and thought to make the following statement.

The fact is, our kids, the young and the innocent, have no clue as to what their parents have done to their future. College? Forget it. A house of their own? Not gonna happen for most of them. A chance at a rich and prosperous future? I don't think so...

Seventeen trillion dollars! The fact is, that baring a revolution, there is no way for a National Debt of this magnitude to be retired in any one lifetime...perhaps not in many lifetimes. So, what's that mean for these two kids? I don't know and I'm not sure I want to...

Even as this post went up, our President along with a
a host of Democrats are in process of destroying the Republic! And why are they doing this? Simply put, it's over pride. The saying that 'pride goith before a great fall' has never been more true. The only problem is that, like lemmings, many of us are mindlessly following what amounts to insane leadership. No family in America could continue to spend money they didn't have without dire consequences ensuing. And now, I'm afraid, America is now much like the Titanic; only we aren't getting the benefit of a band as we sink beneath the waves.... Go now everyone and watch as the National Debt Clock ticks away your children's future....then go home and prepare them for a future that, in all likelihood, will be both brutal as well as short!
Posted by Dan Owen at 8:54 AM

Email ThisBlogThis!Share to TwitterShare to FacebookShare to Pinterest
Labels: Forsythkid, Future of our kids, National Debt