The cost of veggies at the local grocery – October 2013! 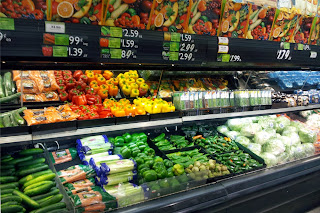 Thank goodness that my eight or so pepper plants are motoring right along late in the season and are still producing some fine banana, bell and long red cayenne peppers! And, while the harvest has not ever been overwhelming, it has been steady enough to service my stir fries and salads.

I feel blessed to have at that one vegetable (which I use frequently at a cheap cost), because the other guys I buy at the local grocery – well, that's not so much the case. Here is a sampling of the cost of some of the vegetables as of the day of this post:

Here's a post I did earlier in the year in January, 2013 that lists some of the prices back then. Thankfully, the cost of gas is currently down some, now at 3.129 a gallon for unleaded. I fear that this lower cost, however, is more due to the terrible economy and the shutdown of the government than anything else. Everywhere, all across the nation people are blaming one side or the other or both for the shutdown. (For my part, I'm certain this was a Democratic Party and far left engineered deal that was spear-headed by a very evil and despicable President Obama). [Forsythkid]