A medical situational heads up! 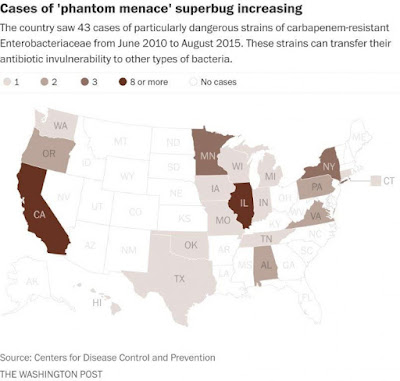 A particularly dangerous super bug, dubbed the "phantom menace" by scientists, is on the rise in the United States, according to a report Thursday by the Centers for Disease Control and Prevention.

This super bug's strains belong to the family of bacteria known as CRE (Carbapenium Resistant Enteriobacterace), which are difficult to treat because they are often resistant to most antibiotics and can spread this resistance to other bacteria via little packets of genes known as plasmids. They are often deadly, too, in some instances killing up to 50 percent of patients who become infected, according to the CDC. Health officials have called CRE among the country's most urgent public health threats. 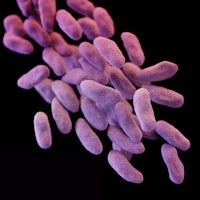 In a recent ProMed report out of India, most infections occurred when a patient got transferred to a rehab after suffering a medical problem. They then contract CRE from a careless healthcare worker who fails to wash their hands properly and thus transmit the bacteria. The patient then gets worst and is sent back to the hospital when another 'hand off' occurs and so the process continues. As, you might gather form this, most of those affected are elderly. But, this may not be the case for long. [A personal opinion - A copy of the ProMed report is available here]
Posted by Dan Owen at 7:41 AM