Left over steak, an egg and whatever~! 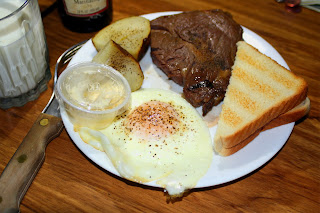 I had cooked up a sirloin steak the day before but had not eaten all of it, sooo the next day I exhumed what had become a piece of cold and gray looking meat from the fridge. I held it up to my bloodshot eyes for a closer inspection and then sighed. It was a Sunday morning, I was hungover and not even Portnoy would have found this cold slab of beef very interesting...

I had to face facts! Resurrecting a day old sirloin would more than likely tax even the most powerful priest. I looked again at that listless piece of beef. There was absolutely none of the 'moist tenderness' that I had enjoyed just 24 hours before.

Well, never you mind, I thought sourly. I tossed the meat onto a plate and placed it into my microwave. (Even if I had little hope of a holy beef redemption, I felt I could at least heat that sucker up a little).

That done, I then focused on the three other breakfast courses; an egg, 1/2 baked potato (baked the day before) and a piece of bread, that was soon to be toast! Since I was using a convection cooking top, I knew from past experience that the egg and toast would cook about the same time (4 min). I set the Duxtop Induction unit to level two, sprayed a bit of Pam into a stainless steel frying pan and then added the egg (sunny side up) with a dash of water. This was covered with a lid and I then moved over to the toaster and nonchalantly sent my Lilly white slice of bread and brown slab of meat into my convection oven where it could both toast my brad and reheat my steak.The potato was nuked in the microwave for a couple of minutes.

A couple minutes later, I nuked the steak remnant on high for about 80 seconds. (Just enough to warm it without drying it even more than it already was). I then assembled the meal you see above.

Epilogue: Why did I even post this nonsense? Well, my doctor told me that writing about stuff that no one would be interested in would help me come to better terms with my useless existence. And, you know what? It helped!
Posted by Dan Owen at 10:56 AM