On one not very memorable morning, I got up early to go get my oil changed at a service location which I found was closing. I had arrived there about twenty minutes before they were due to open and decided to use that time by getting something quick to eat at McDonald's!

At 7:45 AM on a Tuesday in late December, the Golden Arches was pretty busy with a lot of commuter traffic. The drive through line was crowded, although the inside of the store was sparse; there being just a couple of tables occupied by old people like myself. I had plenty of time and so, wisely elected to park and head inside where I could see there was not a soul at the order counter.

'Now this is what it's supposed to be like', I thought to myself as I stepped right up and ordered an Egg McMuffin and a small coffee from a young lady who was no more awake than I was. Fifteen seconds later, I had my food and angled (toddled?) on over to a small table in an otherwise deserted venue. (And, yes, there was a smile on my face)! 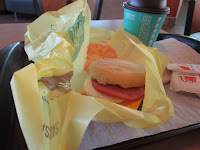 After I had myself seated, I opened up the paper wrapped around my McMuffin and dug in. The taste was excellent, if a little on the brief side. After all, you don't get much food for four dollars and change anymore. But, I was happy as the calories came in at only about 300, thereby granting me the opportunity for a more robust lunch later on in the day. I sat and ate like a contented cow might chew his cud. And, before I knew it, I was down to the last bite or two! 'Damn', I thought. Good food is a lot like great sex. We can never seem to get enough of something that, once found, don't last all that long! 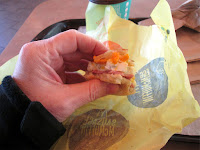 A few minutes later, I checked my cell phone and saw that it was almost 8AM, the time when the Mobile One place was due to open. Hurriedly, dumped the now empty tray, grabbed my coffee and departed. After navigating through the line of cars still waiting for the drive through, I jumped into my Jeep and headed back to the oil change dealership.