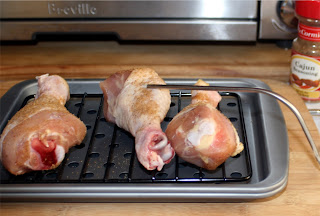 I recently purchased a set of oven pans, mini oven pans as it turned out and planned to use them to roast a couple of chicken legs! 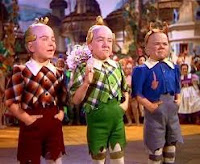 OK, so if you are a single person like myself and want to roast just a couple of chicken legs in your oven, then quite possibly the OvenStuff Non-Stick 6-Piece Toaster Oven Baking Pan Set  might be the right choice for you. (Personally, I could think of better ways to waste $17, but that's just me). I was game, however, to try and use these munchkin sized pans to roast up some chicken legs in my newly acquired convection oven! (In point of fact, I had purchased them and was now stuck with them)!

In addition, I had also purchased a Taylor Precision Products Digital Cooking Thermometer/Timer from Amazon.com. When it arrived, it seemed to work, (although one of the magnets in the back fell out and had to be re-glued into place). Ahem. But, I figured it would help notify me when the chicken legs reached a safe minimum eating temperature of 165ºF. Thusly, I assembled everything as shown and cranked up the Breville BOV800XL Smart Oven 1800-Watt Convection Toaster Oven with Element IQ convection oven to 450 degrees set for 35 minutes!

The three 'clueless' chicken legs, by way of preparation; were washed, patted dry and then coated with just a dab of olive oil. They were then lightly sprinkled each with a combination of hot spices! [Hey! I like my chicken like I like my women... but I won't go there in this post]. Thusly anointed, they were hooked to the temperature probe, shoved into the 425 degree preheated oven, and roasted for the recommended 35 minutes! (Who exactly recommended that period of time has been since lost to me)!

Chicken now a roasting, I then sat back, eyed the Taylor display closely and cracked open a beer while plopped down on a nearby stool. Inside the oven, I could hear the fan softly whirring. Time passed, I opened another beer... the wonderful smell of cooking chicken now filled my kitchen. Then, that Taylor thing began to ding after only 28 minutes! I was suspicious and continued cooking for about 32 minutes. and, guess what? The chicken was not done! So much for digital thermometer technology. Like the pan purchase, I felt I'd also been a little bit screwed with the Taylor thermometer!

This whole mess was rectified by placing the legs into a Microwave set on high for another few minutes. After they were allowed to cool, they tasted fabulous!
Posted by Dan Owen at 5:51 PM