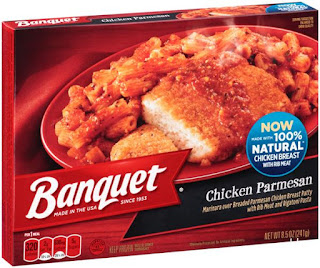 I had thought that by now I would have covered just about all the buck a meal offering from the Banquet folks. Well, I was wrong! This meal offers a chicken breast languidly swimming in a sea of Rigatoni pasta!

When I purchased this dollar meal, I did so because I'm fond of chicken and pasta. The only visual that gave me some pause, however, was the message on the front of that package that declared that the meal was 'now made with 100% natural chicken breast with rib meat!' There was just so much that was wrong there. I mean, it begged a number of questions! Was the meat somehow NOT NATURAL before? And, how much was not a hundred percent? Then again, the concept of 'rib meat' also gave me some pause. I had the mental image of a line of Chinese workers meticulously scrapping the ribs of a chicken carcass with tiny little knives... The thought made my sphincter clinch up! So many mysteries and so little time...

That said, the directions were typical Banquet. If you are a slug and don't like to move much, these meals are for you. Directions: Take out of box, stab the plastic foil with a knife... nuke for a few, stir the contents and then nuke for another two minutes. Gosh! Even I could figure that out!

At this juncture, I normally skew off tangent and bemoan all a meals short comings. I've had few Banquet offerings that I was very impressed with. well...this was one of those very few that actually had a lot of stuff going for it! The calories were a modest 320, the sodium only 630 milligrams (an unheard of amount in other meals) and even the cholesterol and saturated fats were low! and the biggest kicker? It actually tasted pretty darn good! Mein gott! I thought I'd died and gone to heaven!

The bottom line is to go out and grab this meal up before the people at Banquet realize what they've done!