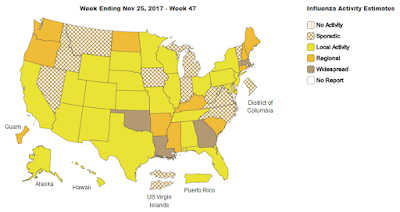 December 6, 2017 – It was with no small amount of concern when I read a Fox New article proclaiming that the incidence of flu cases had more than doubled over what was the case this time last year! According to the story, 'More than 7,000 cases of influenza have been confirmed in the U.S. so far this flu season -- more than double the number this time last year, CBS News reported, citing data from the Centers for Disease Control and Prevention.' Sobering new, so early in the flu season.

And the bad guy or virus seems to be the H3N2 Type A which did such a number on people in the southern hemisphere during their period of winter. The continent of Australia reported the worst number of cases in 2017 ever recorded with over 70,000 taken ill! And the thinking by the Center for Disease Control (CDC) is that these nasty bugs are now headed for us up in the north! At the time of this writing, it appeared that the south central portion of the United States seemed to be leading the charge, as it were.

As we are heading into the early stages of the Christmas holiday season, now would be a good time for families to remember that one of the best ways to avoid catching the flu is to wash your hands frequently! I also did a short piece on some ways to avoid the flu for anyone with an interest!
Posted by Dan Owen at 7:21 AM