McCallisters and the Gumdrop! 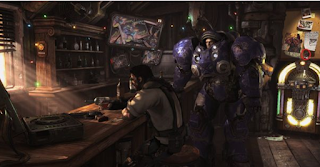 In the small town of Narge, somewhere in the USA, lived two small venues. One was upscale while the other one was no scale at all. Both served food and booze and had loyal followers. McCallisters offered a clean environment in which to eat with clean air to breath as you did so. Families frequented the establishment and most said they were content with the experience. The other facility lurked quietly on the same road, although it did not share in the same type of sparkle that it might have. You see the Gumdrop had grown a tad seedy over the years and decades. Entering the place, one had a sense of wandering onto the set of the Twilight Zone. That is if you could see very clearly through the wafting clouds of cancerous smog the constantly pervaded the air and which caressed every surface. Ah yes, two venues that could not be further apart and in the end only one survived!
Posted by Dan Owen at 9:41 AM