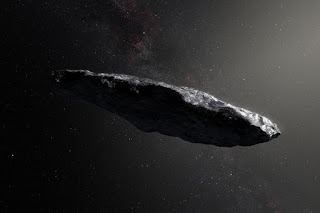 Recently, an object from another solar system buzzed ours! Named 'Oumuamua', the craft shaped object was first spotted on Oct. 19 2017, by astronomers using the Pan-STARRS1 telescope in Hawaii. It was initially classified as a comet, but then regarded as an asteroid after further observations revealed no evidence of a coma (the fuzzy cloud of gas and dust that surrounds a comet's core). Very rapidly, the object made its entrance, swung around the sun and is now exiting stage right! Some people, like the author, remained alarmed.

Noted theorist, Dan Owen, speculated that it's approach angle was not unlike that of some sort of an attack run. 'If true', Mr. Owen went on to speculate, 'One has to wonder if perhaps it dropped off some sort of surprise for all of humanity!'

When queried further on what exactly he meant, Mr. Owen went on to explain that he had long been worried that an advanced alien civilization may have it in for us homo sapiens, even to the extent that they may have directed some sort of viral bomb that could even now be headed for earth.

'I'll tell you all,' Mr Owen went on, 'that rather than calling it Oumuamua, which means "a messenger from afar arriving first" in Hawaiian, a better term might be Shitstormsacoming!' Even Stephen Hawking seems worried!

Astronomers have been running exhaustive tests to try and determine if anything did, in fact ,break off of the object in such a way as to intersect with earths orbit. Those results are still pending....
Posted by Dan Owen at 1:49 PM