Flu on the rise in early December!

Taney County MO - There is little doubt that the 2017-18 flu season is going to be a rougher ride than what we all had become used to in the past. As the graphic above illustrates, the incident of flu like illness is quite a bit more widespread in 2017 that it was during the same week last year. 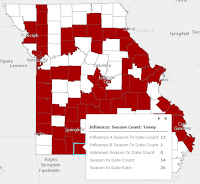 Here in Taney county the numbers had ratcheted up from almost none in the last week of November to thirteen confirmed cases this year! Those kind of increases are somewhat concerning when they occur so early in a season that normally doesn't peak until February! As a result, health professionals are encouraging just about everyone to get out and get a flu shot as soon as possible. They admonish that it takes about a month of time for average person to build up any resistance after getting the shot! so, if you're just getting around to it in Week 48, then you won't see much in the way of benefits until sometime in January!
Posted by Dan Owen at 7:58 AM