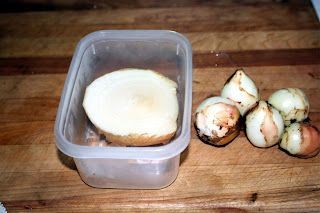 After buying an onion and using up most of it, I'd often end up with a small piece towards the root end of the bulb. This guy often ended up toward the back of the fridge in a container of some sort where it would languish for a long period of time.

On day, while I was cleaning out my fridge, sure enough there was an onion piece escounched in a container in the back. I noticed that a green shoot had emerged from the center and on impulse, planted it in a small pot of soil. I watered it, placed it on a kitchen window sill and then forgot about it.

A week later, I noticed that the son of a gun was growing like there was no tomorrow. I water it again and moved it outside to catch some direct sun. Then, after about three weeks, viola, I had a batch of mini onions to enjoy!
Posted by Dan Owen at 7:48 AM