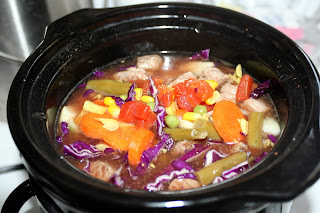 Getting the urge to make soup sweeps over me at random intervals and times. But making vegetable beef soup can be time consuming. So, here's a quick soup that comes together quicker than a cheap hooker's legs when she discovers I'm broke! What did he just say? 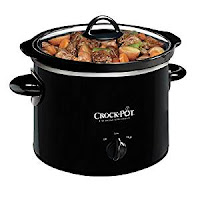 To set the stage, I often like to use a small crock pot that holds about 8 cups of soup (2 quarts). That's enough soup to last one person for about four meals or half that for two people. I then like to grab a few fresh veggies while also using three cans of assorted veggies. Note that left over amounts go into storage containers to be used as side for other meals. Note: the slow cook pictured at tight is a Crock-Pot brand 2 quart model that sell for about $15 and which has received rave reviews! And, while I have a couple of other larger deals I could use, I like this one the best!

Hey! Listen up! None of the amounts stated above are set in concrete. I generally just eyeball everything as it gets thrown into the pot. If I'm missing something, I smile and then move on. The beef gets a quick sear in a hot frying pan before it is unceremoniously dumped in with everything else! If there is some space left at the top, I add in some water. There! You're done! If you are practiced, like I am, this whole deal goes together in under ten minutes. Cover the slow cooker, set it on high and just walk away for four hours. Then, before too long, you've got yourself one awesome soup!