The real truth about that radar dish going down! 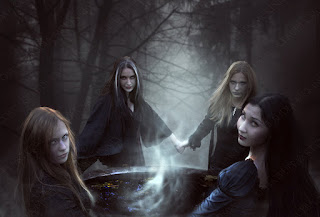 Springfield MO. – Rumors have been running amok ever since late June the 14th when the Doppler radar tower stopped functioning after a freak 'storm' crossed the area. Almost immediately some people began to report on what they felt was the cause of the stoppage. One prominent rumor had it that an alien spacecraft had landed nearby and that strange creatures were using the dish to send signals out into space to help organize a full invasion! Balderdash I said. As I had the real scoop. But, I hesitated to speak about it as it might foment general panic to erupt. But now, after some time had passed, I felt it was time to come clean with what I knew.

Witches were responsible. There! I said it. More to the point, it was a witches coven that had set up shop at the Springfield building on West Highway EE near the airport. Sadly, I feared that all the weather personal had since been boiled in a large pot and consumed. Now four semi-attractive evil demons from hell were ensconced inside that white ball on top of a sixty foot tower, doing only God knows what.

Being a man of strong and true fiber, I've decided to wait until midnight on June 24 when the moon is full and then penetrate deep inside the ball and even perhaps one of those witches... Wish me luck!