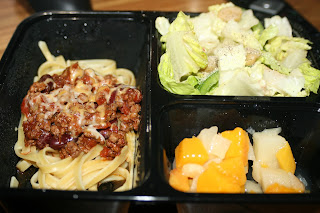 At some point while on a late night drunken bender, I had the brilliant idea of ordering a bunch of 3-compartment food trays with lids. I thought that it would be a great idea to make up a few meals beforehand to make things easier on myself...
----------------------
Right off the bat, it became apparent that getting a 'workable combo' of foods together was going to be more of a challenge than I'd thought. At least, at times. For instance, there was the hot-cold food concept. If you tried to do a combo meal like that, it became a little problematic when it came time to eat! Here's an example:

As you can see in the picture above, I've got a spaghetti-chili main course matched to a small salad and mixed fruit pair of sides. How was the pasta going to get heated up while next to two cold foods? Aluminum came to the rescue! I merely lined the two cold food area in foil. The foil packets then could quickly be removed prior to nuking the pasta. This actually worked out quite well.

I ball-parked this 'tiny meal' at about 300 calories in a balanced mix of carbs, protein and fiber.
Posted by Dan Owen at 12:18 PM