And so, the stampede begins! 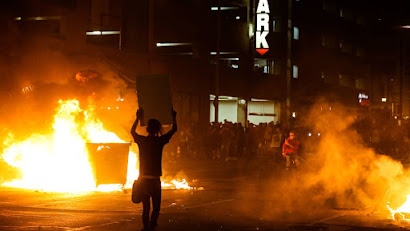 As Democratic run cities continued to burn while rioters loot and hurt citizens, tens of thousands were fleeing cities in search of 'better and safer' conditions. Some Mayors of liberal nests seemed unfazed. (See the article where Mayor De Blasio even told his NYC citizens, basically good riddance). The question in the minds of many is, 'just how many millions would become displaced into small towns that could ill afford to take care of them'?

While my small town in southwest MO., had not yet been highly impacted, I feel that it was only a question of time before individuals began to arrive from bankrupt and 'war torn' locations to try and settle into our area where they would might not really be welcome. The virus, which has devastated much of America, has often rendered jobs a very scarce commodity.

I would hope that ultra liberal states, like Michigan and Oregon, would open their arms wide to receive the tens of thousands of members of groups like antifa, BLM and other communist revolutionaries, while leaving the heartland of America pretty much alone. After all, Michigan, isn't that the Progressive thing to do?