What pandemic? All I'm seeing is control! 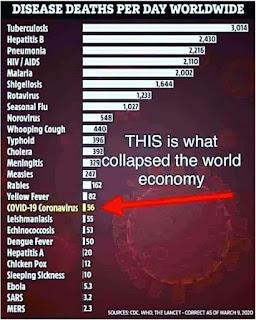 While I'm sure that many are dying of the Covid-19 virus, I'm not so sure that the significance of this disease hasn't been blown way out of proportion!

Note that the chart above is from March 2020. (There are none I could find that were closer to August. Perhaps it's beyond the abilities of health organizations to track and report...)  But, assuming things are progressing pretty much along the same lines... One can see that, in the pecking order of all things nasty, the Covid-19 virus ain't all that much.

So, why all the hype? Why the social distancing, hand washing and mask wearing going on seven months? The best I can determine is that this little virus dude became a weaponized political football early in the game! The Democrats, in particular, realized that they could play the mail-in voter fraud thing to a much larger degree than what would have been possible before people were scared shitless of leaving their homes. (When you can keep a populace afraid, you can control that group to a great extent). Ergo, the Left leaning mass media continues to spread fear while some useful idiot groups are merrily burning cities, for good measure. But, could this effort totally backfire on Biden come November?

Even now, some of the more moderate Democratic leaders are sounding the alarm that things ain't quite right at the old DNC as far as pole number are going. It turns out that many moderate Democrats and fence riders are just as appalled at the extreme Left's actions, as the rest of the Conservatives all across the Nation! (It seems that when someone burns down a business, that it's taken a Democratic family a lifetime to build, well let's say they're not very happy campers).

Couple this spreading unhappiness, while thugs like the BLM and Antifa are bashing in grannie's head... While, coping with a lackluster candidate in Joe Biden... While witnessing historic increases in the stock market and lots of Democrats may be taking a hard right at the worst possible time!