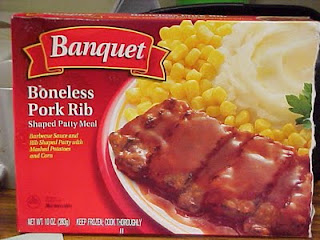 Finally! After working my way through a gaggle of 'buck-a-meal' Banquet offerings over the past month, I think I may have found the pick of the crap. Uh, crop.

Whenever I think of pork ribs, I’m always reminded of the infamous McRib that is still offered, off and on, by the McDonald’s franchise. While over-priced (like much else they offer), it still tastes pretty good. (I think this is due, in no large part, to that tangy sauce! Take that away and you'd maybe have a Banquet Meatloaf Meal in a bun).Yuck!

The cooking instructions (like many of Banquet's dollar meals), runs along the line of; slit it, nuke it, stir it up and then nuke it 'one more time baby' just to make sure it's positively and absolutely dead.

After watching my evening meal spin around for three minutes in the microwave (can you get brain damaged from doing that? ), I went to the fridge, got the butter out and grabbed a fork from the dishwasher. Man, I'm ready to eat!

A short time later, while seated at a table, I pointed my TV remote at the tube and got down to eating this meal a deal. As usual, the process went pretty fast (hunger does that to you). Also, there just wasn't all that much to eat... about 370 calories and two hundred and something grams, if I remember correctly. (Actually, every $1 Banquet Meal comes in at only 300-400 calories, now that I think about it. A factoid I may want to investigate at some future date.)

Surprisingly, the overall taste of this meal was much better than I’m used to from Banquet! Whereas most of the critiques I’ve done were lucky to get a six on a scale of ten, I ranked this one a solid 8! The combo of mashed potatoes, corn and BBQ sauce on rendered pork is hard to beat and good to eat!

Update: Since this post, Banquet has since downsized this meal and now calls it their Boneless Pork Riblet Meal! The newer and smaller meal is only 283 grams for 310 calories. What progress!
Posted by Dan Owen at 4:14 PM