Most people know instinctively which way the wind blows! 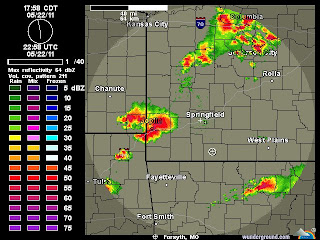 I’m not sure what it is, but when nasty weather is in the offing, most people know it. And they know it without the need for the media too. In that sense, we are much like most animals that can sense trouble, even when that trouble is far off. Maybe it has to do with the humidity or the way the wind blows, but something in a primeval part of our brains assimilates the data and begins to send a signal of unease to the rest of the body.
The events, last night, of May the 22nd was a good case in point for me. Well, before the warnings came up on the TV and even before my conscious mind understood the severity of the storm that hit areas like Joplin Missouri, I was doing stuff I don’t normally do in preparation for bad weather. Stuff like checking to make sure the flashlight had good batteries and moving a folding chair to my storm shelter under the stairwell. My location in Forsyth Missouri and was in the path of the storm that ended up killing so many that night. Even thought the storm cell over Joplin didn’t look all that dangerous on the internet radar screen, a feeling of unease began to surface.
I can also remember watching a program on the TV and being interrupted by the warnings issued by the National Weather Service. My thought, as they came with more and more frequency, is that most viewers had already turned to the local channels where the coverage of the system impacting the area was now non-stop. But, I also had the feeling that even if a person didn’t have access to a media outlet, that they might be instinctively reacting to the changing conditions around them. I’m not sure how it could be done, but this would be a good area for researchers to look at. Some questions that could be researched are; 1) do humans (or animals) instinctively know when dangerous weather is nearby and 2) what internal mechanism that allows them this knowledge?
That’s all for this blog. Another storm is approaching….
Posted by Dan Owen at 8:57 AM