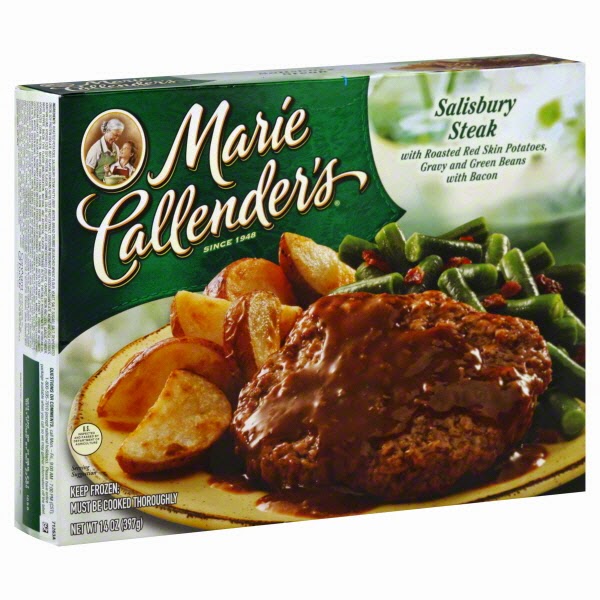 To date, I've written several critiques covering Salisbury steak offerings from; Healthy Choice (Score = 8), Lean Gourmet (a 7), Michelina (a not so solid 7) and Banquet (also a 7). Other than price differences, these meals tested as OK to eat, just nothing to go out of your way for. But, this day, I was going to sample the offering from Marie Callender and I was looking forward to the experience!

According to the box - “Marie Callender's® classic Salisbury steak is worth savoring. It's topped with a traditional brown gravy, and served alongside oven-roasted red-skin potatoes. The meal also includes broccoli and cauliflower smothered in a creamy cheese sauce. “ Sounded pretty darn good to me. But, then again, every TV dinner I've ever tried sounded good text-wise! The cost of this meal was $2.99 when I purchased it at a local grocery store in the Forsyth Missouri area. I'd eaten this brand before and other than the Healthy Choice series, found it to be generally acceptable. The problem with the HC offering is the high cost, even considering you get an upscale nutritional mix that is generally low in salt.

The directions for preparing this meal deal were straight forward. You remove the tray from the box, slit the plastic over the veggies, nuke on high for 4, open and stir the potatoes, re-close and nuke for another 3 minutes or so. Easy greasy and just the right degree of difficulty for the slower minded among us. That'd be me!

After the required amount of time in the microwave, I sat down to enjoy yet another, in a long line of frozen TV dinners. A history that began for me in the sixties, was interrupted for a time after I learned how to cook, and then was resumed when I became to lazy and too old to want to bother with preparing really good nutritional foods.

Speaking of nutrition, the label wasn't too shocking. About 420 calories with a small mountain of salt added for taste. Salt, you know, is added to a food to help make it more palatable. (Cave women used it a lot when they served what was, in effect, rotting meat to their men). Today's modern man or women of age who eat this stuff are practically begging for a good case of hypertension....

here's the skinny on the contents; the potatoes were helped out with a splash of A1 sauce and were OK, the broccoli and cauliflower veggies in that creamy sauce were actually pretty good and that Salisbury steak...well it's really not a steak at all but just plain old meatloaf. Something to put into your mouth and chew on.

I gave this $3 excursion into the frozen food wastelands an 8! Hooray! It's one of the best of the lot!