And so now the great conflict stage is set! 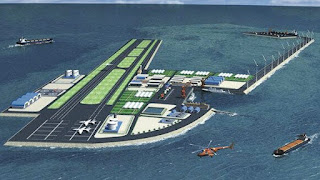 Imagine rolling a large powder keg onto a hot and roaring fire! That just might perfectly describe the state of the world as America rolls towards a fall election. An election that could see Donald Trump placed as the head of a country already in caught up in internal turmoil!

Personally, I could not imagine what would happen internationally should that transpire. Trump is the physiological and diametric opposite of Obama in terms of foreign policy; one could even liken him more as hyped-up version of Putin. He certainly would not be the squeaky mouse we've had in charge for the last eight years. And, therein lies the rub....

Folks, I don't believe I've ever witnessed a world that is so ripe for a world war as the one I find myself in going into 2017. China, Russia, North Korea, Iran and ISIS are all proven players in the roles of those who would rule the world. All of of them are active and growing in their hunger and are poised on a razor thin line at this time. (President Obama abrogated America's role as a world leader a long time ago and now were seeing some very dangerous individuals filling in the void he left).

Of the five I've mentioned, China is currently the real elephant in the room (my opinion). They are effectively creating a choke point in the south china sea, (via a set of islands) that could easily close off the flow of commerce that amounts in the trillions annually. They are also militarizing some of these man made islands with weapons of war! And yes, I can guarantee that there is a master plan in place. Getting them to retreat, at this time, is neigh impossible and would require the use of extreme force. (Exactly the sort of action that could easily ignite that powder keg I was referring to earlier). The fact that China's economy is also in the process of total collapse doesn't help very much and has only served to hasten the ascent of men to whom the word 'strategy' has little to no meaning.

Meanwhile Putin like the cat he is, is waiting patiently on the side, building up his forces to retake the Baltic states along with other lightening fast land grabs the moment a major world war breaks out. (He has also been rumored to be acting very closely with Iran to help insure that that country realizes its share of the Middle East). Likely caught in the pincer like action will be much of the oil producing countries with the resulting overnight drop off in supplies of oil to the rest of the world.

And then there is ISIS. A group of loons that will likely feed off the carcass that was a semi-civilized world after the collapse. They represent almost pure unadulterated evil and would love nothing more than to see everything fall down with a return to the sort of conditions they currently call home. I always think of them as I would envision a tribe of rabid hyenas feeding on the African Serengeti.

Yes, Donald the Trump will have his hands full when, and if, he is elected. The only worse possible scenario would be seeing Hillary or, God forbid, that communist Sanders rise to that control. I really don't think I could take that and would likely move to Canada...
Posted by Dan Owen at 5:58 PM