Forsyth MO. – Every so often in ones life, I've run into exceptional individuals working at improbable occupations. When I look back over the years at my experiences with auto repair facilities, I've generally walked away disappointed for one reason or another. That business sector has been often populated by practitioners that could best be described as somewhat shady. That was definitely not the case at the Tire Crew located at 13149 Hwy 160 just to the north of Forsyth Missouri! The owner, Don Goodman who is ex-military, runs a very 'tight ship'. I felt I was treated very promptly and in a professional manner. 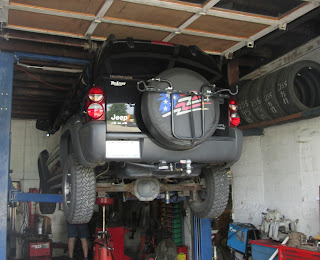 While waiting for an oil change, I was impressed with the amount of activity going on. Mr. Goodman was on the phone with a local parts supplier who had promised that a part would be there early Monday, but which was not. When he discovered that there was another duplicate part over in Branson West, he dispatched his daughter in law, Heather, to go fetch it for two customers who were there waiting patiently at the facility for that part to repair their vehicle. I found that sort of 'get it done' attitude to be rather impressive.

The Tire Crew does just about everything right, be it new tires, oil changes, brakes, exhaust systems, batteries or just about whatever needs to be done. They even have a towing service and can pick up a customer when their vehicle is ready to go! Add that to the fact that their invoices are itemized with fair pricing and I think I will be a customer of theirs for years to come! The Tire Crew shop can be reached at 417-546-7435!

Update: December 2016 - I went to the Tire Crew for an oil change and was handled in a very professional manner! Don Goodman was there, working hard as was usual for him. This service company has always been busy (a good sign) and they offer full automotive care.
Posted by Dan Owen at 10:10 AM