Forsyth MO. - On the evening of Tuesday, August 12, 2016, a three alarm fire erupted and caused the almost complete destruction of the encapsulation portion of the three building campus at the National Enzyme Company located off Highway 76 about one mile outside the western city limits. As of this post the cause of the fire was still under investigation. 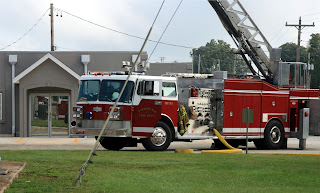 At left, a view of the IT building which I was told was undamaged. The hook and ladder fire truck was deployed the prior evening when flames could be seen erupting from the main building.

My good friend John Carnahan, also got some great shots of the extensive damage. 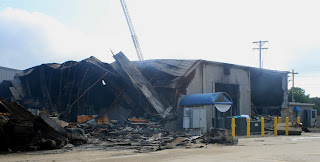 I was allowed to walk around the fire scene and had a chance to grab a few pictures of the aftermath on Wednesday morning. I was told by one individual whose parent worked for the company, that NEC was already in the process of looking for commercial space so that they could get back into operation as quickly as possible. As someone who was with the firm for many years, I can attest to the fact that it will be some time before that happens. I would also estimate that this loss will be in the millions of dollars.
Posted by Dan Owen at 10:07 AM