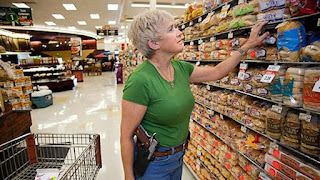 Jefferson City MO – Here's the deal: The Republican-led Legislature enacted a Constitutional carry law Wednesday, September 14 by a 24-6 Senate vote and a 112-41 vote in the House. Both exceeded the two-thirds majority needed to override the veto of Democratic Gov. Jay Nixon.

The legislation will allow most people to carry concealed guns without needing a permit. That means they won't have to go through the training currently required for permit holders. Missouri will join only 10 other states with what supporters describe as a "constitutional carry" right. Other rights such as 'stand your ground' and the Castle Doctrine' were also strengthened.

So, does that mean everyone can now walk around with a gun strapped to their hips in plain sight. No, Missourians already have that right, subject to local ordinances. And it's best to know exactly and to the letter what and where those restrictions may apply. For instance, many local stores reserve the right to ask a customer to leave their premises if they walk around with a gun in plain sight. The carrying of any weapon open or otherwise is prohibited in places like government buildings, banks and schools. Even standing on a street corner with a gun visible can cause you problems if someone else decides to call the police. So, it is perhaps best to be circumspect and conceal whenever you are out and about.

The most major impact of the law will be the elimination of the need to get training, pass a firing test and then having to make an application out at the cost of a hundred dollars or so. So, if you're an average Joe or Sally, you can go ahead and carry concealed effective as of this post. Understanding, of course, that if you choose to not train with the weapon, nor understand the nuances of civil and criminal charges you may become entangled with should you employ deadly forces, then be now forewarned. Even a shooting where you were clearly justified with witnesses may or may not exclude you from court proceedings. It's not unusual for the relatives of the crook you killed to sue you in civil court to the tune of thousands of dollars... You have been warned!

Meanwhile....  In a split decision, the U.S. Court of Appeals for the 9th Circuit said that there “is no Second Amendment right for members of the general public to carry concealed firearms in public.”
The San Diego policy states that “simply fearing for one’s personal safety alone is not considered good cause” for the purposes of obtaining a license.

The majority opinion, written by Judge William A. Fletcher, made a distinction between concealed carry and open carry, and did not try to answer whether the Second Amendment protects “some ability to carry firearms in public, such as open carry.”

Thus, while some states were making progress in the area of gun rights. Behind the scenes, the increasingly left leaning court system appears to be systematically removing many of the supports of the 2nd Amendment...