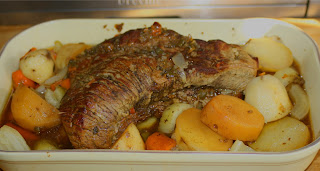 One afternoon, while sitting at a local watering hole, I was talking with a friend named Nita about the popular condiment called horseradish and how we both liked this spicy white stuff served on a slab of pot roast. That conversation got my salivary glands working and I made it a note to myself to stop at a local meat counter the next day to pick up a 2 pound roast! Allez cuisine baby!

OK. So fast forward a number of hours and I found myself armed with the following ingredients:

I prepped the veggies, seared the meat on each side for about four minutes, placed the bag into the cooker and threw everything on in. After sealing the bag with the supplied plastic tie, I elected to set the Rival cooker on a high setting (230ºF) for about two hours and then reduced it to low for another four. 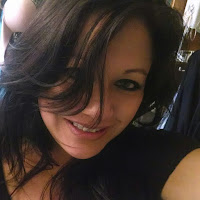 'As an aside, another good friend of mine (named Brandy) gave me some cooking tips that I found interesting. Apparently her culinary philosophy is to do as little as possible when preparing this dish. For instance, she doesn't bother searing the meat prior to placing it into the cooker. She also avoids the peeling exercise by rough cutting up some potatoes (skin on) and by using baby carrots. (I had no idea if she bothered with peeling an onion). Everything is simply dumped in along with a little water and a tiny prayer book. The cooker is then cranked to the max early in that morning and everyone goes out to frolic. Later that day, I think she counts on someone taking notice of 'that smoking thing' in the kitchen and voila the meal is ready! Just kidding as Brandy is a very smart woman.'

As  the clock on the kitchen wall ticked the minutes away, I successfully resisted the temptation to open the cooker lid to take a peek. And, let me tell you. That's hard to do! At any rate, by the afternoon around 4PM, the deed was done. I removed the roast and veggies to a small platter and took the picture you see above.