A casino and ferry boat route for Rockaway Beach? 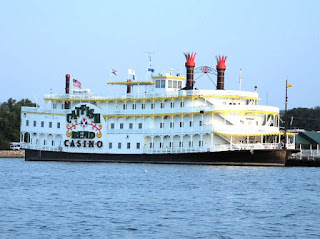 Forsyth MO - Back in June of 2016 I wrote a short piece on a pie in the sky ferry boat system for Taneycomo Lake. In the post, I had the idea of a three stop route that would help to renovate the failing economic futures of town like Rockaway Beach and Forsyth. And, while I received zero comments on the merits of the post or of the idea, a new development has arisen!

Recently, Don Smith the newly elected Mayor of Rockaway Beach appeared on a news program vowing to get an amendment on next year's ballot to allow a riverboat casino to operate in the town. This effort would be very similar to another attempt launched in 2004 that ultimately failed. The difference this time is the sad economy and many people's desire to see renewed economic prosperity where none currently exists!

Should this amendment get on the ballot and should it pass, that ferry boat concept I wrote about earlier would make a great deal of sense!
Posted by Dan Owen at 11:03 AM