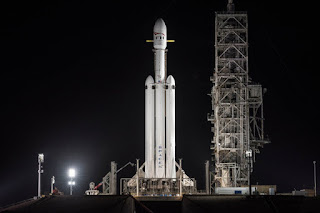 CAPE CANAVERAL, Fla. — SpaceX's giant new rocket, the Falcon Heavy, is set for its risky first test launch today (Feb. 6) from the historic Pad 39A at NASA's Kennedy Space Center in Florida.
The launch window stretches from 1:30 to 4 p.m. EDT (1830 to 2100 GMT). You can watch the launch live here on Space.com, courtesy of SpaceX, beginning at 1:10 p.m. EST (1810 GMT). Weather conditions are currently at 80 percent "go" for today, and 70 percent for a backup launch time tomorrow, according to the 45th Space Wing's Weather Squadron, which monitors weather for air and space operations at Cape Canaveral Air Force Station and Kennedy Space Center.

The inaugural test will be flaunt with grave risks, as the vehicle's 27 first-stage engines will all need to light at the right time. The rocket stands 230 feet (70 meters) tall and will be the world's most powerful operational rocket, able to lift payloads of up to 19,000 lbs. (57 metric tons) into orbit. If it works! For this launch, though, the Falcon Heavy will have a smaller, stranger payload: Musk's car, a red Tesla Roadster. The car is set to end up in an orbit around the sun that's far enough out to reach Mars, had the mission launched at the right time, and Musk said it will carry cameras that should provide "some epic views," if all goes well. (Rumors that a crazed money, named Vernon, will be sitting at the wheel of the car have been repeatedly denied). 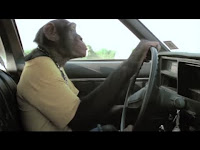 What is essentially three Falcon 9 first stages will boost the rocket into space, and then SpaceX will attempt to land all three of them. Two will set down on land, while the center stage, which will travel further, will land on a floating barge. Musk has emphasized that this is a high-risk launch, setting expectations low for a successful maiden flight. The vehicle's 27 first-stage engines will all need to light at the right time, for instance, and the central first-stage will undergo a lot of stress during the launch. After Musk made that comment, the Falcon Heavy underwent a successful engine test-fire, in which all the first-stage engines ignited for about 10 seconds on the launch pad. The good news is that the test was successful!

"It'd be a real huge downer if it blows up," Musk said during the teleconference. "If something goes wrong, hopefully it goes wrong far into the mission, so we at least learn as much as possible along the way … I would consider it a win if it just clears the pad and doesn't blow the pad to smithereens." Musk said that rebuilding the pad could take 8 to 12 months, which would be the limiting factor for when they could try another launch if this one went poorly; SpaceX can build another Falcon Heavy to test in 3 or 4 months.