My problem with Hunt's tomato sauce! 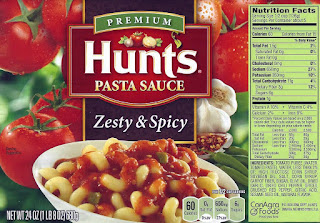 As a man who loves to eat pasta, you would be right to think I would be picky about what sort of sauce I put on my noodles! And, as a careful shopper, I've taken advantage that Hunt's tomato sauce in the 24 ounce can which when on sale can be bought for only a buck! The sauce itself is great tasting and when you look at the nutritional label, you'd only see one big offender which would be the large salt content! (But, that's not why I have a problem with this product). It's the fact that they use High Fructose Corn Syrup (HFCS) as an ingredient. Yes, it's in a small amount, but it's there and it shouldn't be, in my opinion!

So, I wondered why use an ingredient that's really not very good for you? I'm not sure, and it doesn't look like much can be done on my part, as most of these types of products use it with abandon. I believe that they do it for three reasons; it's liquid in form, cheap and enjoys multiple byzantine agricultural supports and subsidies! That said, it wouldn't add that much to the cost for ConAgra to switch over to regular old glucose or even a sugar substitute. I know that I'd be happy to pay a little more, if they did!

Update: Feb 14, 2018 - I did receive a response from ConAgra in the form of an email. They denied using corn syrup, but used a different product as an example. I sent back a copy of the label shown above.