The ultimate horrors of Global Warming! 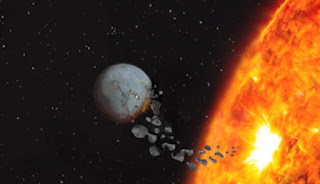 Forsyth MO. – It was February the 15th in 2018 at 7:30 AM in the morning that I happened to glance at the outdoor thermometer and could not believe my eyes! Sixty seven degrees! I stopped eating my breakfast and ran right to the phone to call the local Chapter of the DNC.

I got a hold of someone named Phil who heard my tearful report and who also conferred with me that, yes indeed, it sounded as though GW (their progressive abbreviation for Global Warming) was in point of fact happening! He urged me to remain calm! Then, after confirming my membership status as a dyed in the wool Democrat, he then launched into a ten minute rant as to how GW was the fault of the Republicans and of Donald Trump in particular. (I listened with rapt attention and even took down a few notes). He finished by promising that, 'when we retake our rightful control of the Capitol come 2020, some sweeping and stringent (and very expensive) reforms would be swiftly put into place'. (Before hanging up we both then reaffirmed our total allegiance to Hillary and then preformed a very secret Party salute that involved grabbing our balls until they hurt).

I have to admit, to my readership that after talking to Phil, I did venture outside to wander around a bit in the warmth that was GW. (The air had a strangely poignant smell to it and you could almost hear the stirring of life in the plants as they tried to awaken into a false spring). Then suddenly, out of nowhere, a cockroach skittered across one of my shoes! I was aghast! (One of my many Democratic buddies had shared with me, some time before, that one of the effects of the early warming would be an explosion of the insect populations and in particular that of roaches)! Damn those Republicans, I thought!

I then took it upon myself to compile a list of some of the scientific fact-based horrors (as reported by CNN), that await planet earth, should we allow GW to continue:

It is for the above reasons, that we must elect the Democratic Party so that they can impose drastic and very stringent regulations on all Americans to bring down the CO2 levels to about zero. (I'm told that could take awhile, say about two million years). But, just imagine, all that time under the fair, politically equal and oh so progressive smothering of people like Chuck Schumer and his descendants!
Posted by Dan Owen at 8:20 AM