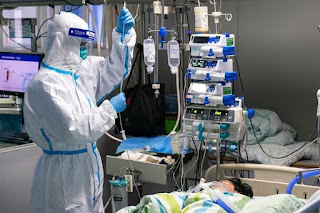 Engineer a virus that is very contagious and release it in Dec 2019. This virus is similar to the flu virus from a genome standpoint. By early summer when the virus finally dies out,a bout 35% of the Chinese population have gotten sick and have recovered. Over in America, only about 1% had this bug due to very energetic efforts to contain it.

November 2020 - A second engineered virus is released in Hunan China. However. This bug, while also highly contagious is virtually identical to the Phase 1 bug with the exception that it also has a gene complex that makes it very lethal with a mortality rate higher than that of Ebola.

Perhaps 500 million Chinese get sick and die, but not those millions who got the original Phase 1 dude. They are basically immune. Over in the US and other developed countries where the original bug was highly contained... Well that would be a very different story will many tens of millions dead.

The economic scenarios for China and the US would also be very different. As morbid as it may sound, China can easily afford to kill off half a billion of its citizens, while the US would suffer much more and might even see an economic collapse, as a result.

Why engage in a messy world war when you can defeat your opponents with a tiny bug!